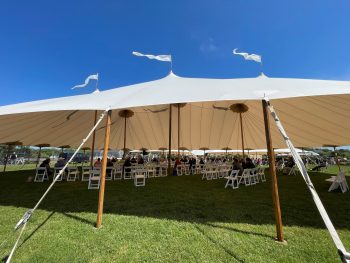 For the first time our Annual Town Meeting was held outside, under four large tents. It was a crisp and clear day with a breeze and the meeting started at 9 AM on June 5th and wrapped up 9 hours later at 6 PM. Madam Moderator, Sarah F. Alger, as usual, did an excellent job of controlling the meeting and moving it along so that it finished in one day. Also new this year were individual handheld electronic devices for voting which gave instant, and accurate results, saving a lot of time. For many of us it was the first time we had gathered in a large group in over one year. The rows of chairs were spaced out and the microphones got disinfected after each speaker. There were 922 people present to hear, and vote on, the most controversial articles. Article 90, sponsored by ACK*Now, sought to regulate and restrict short-term rentals. Unfortunately, the proponents inaccurately portrayed the owners of these properties as evil corporate interests who do not care about Nantucket which is simply not true. They also tried to promote that passage of the article would create more affordable housing for year-round residents, also untrue. The voters saw the article for what it was – an effort to control people’s private property rights and dictate who gets to come to Nantucket – and voted it down by a wide margin of 625 to 297. Had it passed there would have been severe impacts to businesses that rely upon the shoulder seasons for income.

Another article that had generated a lot of community interest was Article 97 which proposed to take 1/4 of the Land Bank revenue and divert it towards affordable housing issues. The article failed, also by a wide margin, confirming that the community feels that the Land Bank is doing a good job and that there are other methods to fund affordable housing initiatives. In fact, the meeting voted over $16 million towards affordable housing, some of which requires an additional vote at the polls on June 15th. Unfortunately, Article 38, which would have allocated some of the income from the Room Occupancy Tax for affordable housing failed to garner the 2/3 needed to pass. This tax, currently 11.7%, is paid by visitors to Nantucket who stay in inns, hotels, and short-term rentals. The local portion of the tax is 6% and 5.7% goes to the state. Currently the money goes into the general fund for the Town of Nantucket. It seems that it makes a lot of sense to allocate some portion of this tax, paid by visitors, to helping house our year-round population.