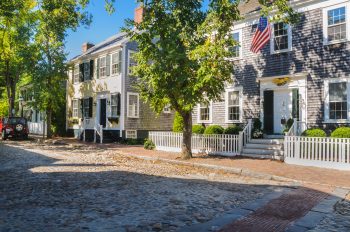 The Nantucket Historic District is a National Historic Landmark District that encompasses the entire island of Nantucket. The original listing in 1966 on the National Register of Historic Places included only the historic downtown core and the village of Siasconset, but was expanded in 1975 to include the entire island, as well as the islands of Tuckernuck and Muskeget. At over 30,000 acres, it is the largest conventional historic National Historic Landmark District by area in the contiguous United States. Since 1955 the Historic District Commission (HDC) has been the governing authority charged with the preservation of the island’s built environment. The HDC is a five person commission whose volunteer members are elected. They meet a minimum of weekly with additional time spent on site visits. The HDC has jurisdiction over the exterior of any structure on Nantucket that can be “seen from a public way” which includes Nantucket Harbor. The HDC has written a guide to help the public understand the guidelines on Nantucket. Called, “Building With Nantucket In Mind”, the guide covers, among other things, appropriate size, siting, additive massing, fenestration, materials, paint colors and hardscaping. We can thank the HDC for the fact that Nantucket does not look like everyplace else.